Due to the number of large trees in this section, the diagram was created using Google's January 2014 imagery, which makes more detail visible.
Section 1 is the oldest section of the cemetery, and the section with the most unanswered questions. Most of blocks 12 and 13 are an unknown layout of mostly unmarked graves, and this information is probably lost to time. Blocks S and T are two rows of graves along the back fence that were likely added to use the edge of the property that had been omitted when originally laid out. Blocks 1–11 are fairly easy to follow, but less organized than the rest of the cemetery, as blocks were apparently numbered based on family purchases, from front to back, so one lot may have 12 graves and the next may have 2, and lots may be the full width of the block or only half the width like other sections. Lots within each block are generally numbered from 1 near the back fence to 18 or so as they approach the driveway that runs along the section. Section 1 is bordered on the east by a fence, on the north and west by driveways, and on the south by a grassy strip of land about 20 feet wide with no graves in it.

A copy of the original plat map of this section is included below.

Notes about each block of Section 1

Block 1: The front (driveway end) of block 1 has a distinctive marker in the form of a square pillar with a closed book carved on top of it. This memorial to Isaiah Noel Mason (d. 1909) serves as the visual starting point of Section 1, block 1, which extends north and east from this point. It is lot 18. Lot 17, next to it, is a large family lot for the Austin-Carroll-Quarles-Smith family. The back of this block includes the tallest marker in Hillcrest, an Obelisk for Annie Davis (d. 1910).
​
Block 2: This block has several distinctive markers provided by Woodmen of the World, including a tall one shaped like the base of a tree at the front, for William B. Johnson (d. 1915). Other graves marking the front of this block are for the Youngblood and Norton families in block 18. In June 2016, the large old oak tree at the front of this section fell in a storm. It just missed the Johnson stone but limbs landed squarely on the Newby family Woodmen of the World stones, dislodging them but not causing much damage that we can see as of this writing.

​Block 3: This section has blocks 17 and 18 near the driveway with surnames Bunn and Turner. Behind those are a number of Fowler graves, including the oldest date of death liste in the cemetery—Bobbie Fowler (1882–1886). This is likely a memorial-only marker or a reinterment, as the cemetery is not believed to have been operating at this time.

Block 4: Near the driveway can be found three flat markers for the Callahan family, plus a CSA marker for William Boran Callahan, which was placed by late Hillcrest Historian Steven Bramlett with the assistance of family member Wylie Callahan, operator of East Point Hardware. A large group of Gaston markers is near the back, followed by two Morris markers.

Block 5: There is a large tree at the front of this lot that somehow seems to have become the place to dump fallen limbs and old flowers—this is not our intention. There are a few more Callahan graves near the driveway, with markers for Pope, Flatauer and Cooper behind the tree. The back of this block is punctuated by a badly placed coping wall around some Branch graves that was installed without our knowledge in the mid-2000's. It is crooked and the stones seem to have been taken up and replaced. after it was built.

Block 6: This block has a distinctive family marker for the Short family on one side and Kohler on the other. Behind it a little ways is the twin-columned marker for Rev. and Mrs. Phillips—the most massive memorial in the cemetery. This block ends with the Bannister graves in the back. Behind this point is the beginning of blocks S and T, described below. These graves are not part of blocks 6–13.

​Block 7: This block begins with a double-lot for the Harrison family. Behind this is a lot that was once surrounded by classic wrought-iron fencing. Most of this fencing has been stolen over the years (see photo). Reuben Phillips, memorialized on the large stone in this lot, is believed to have been the first postmaster of East Point. As with Block 6, this lot continues back to just short of the fence, leaving the two back rows for blocks S and T. 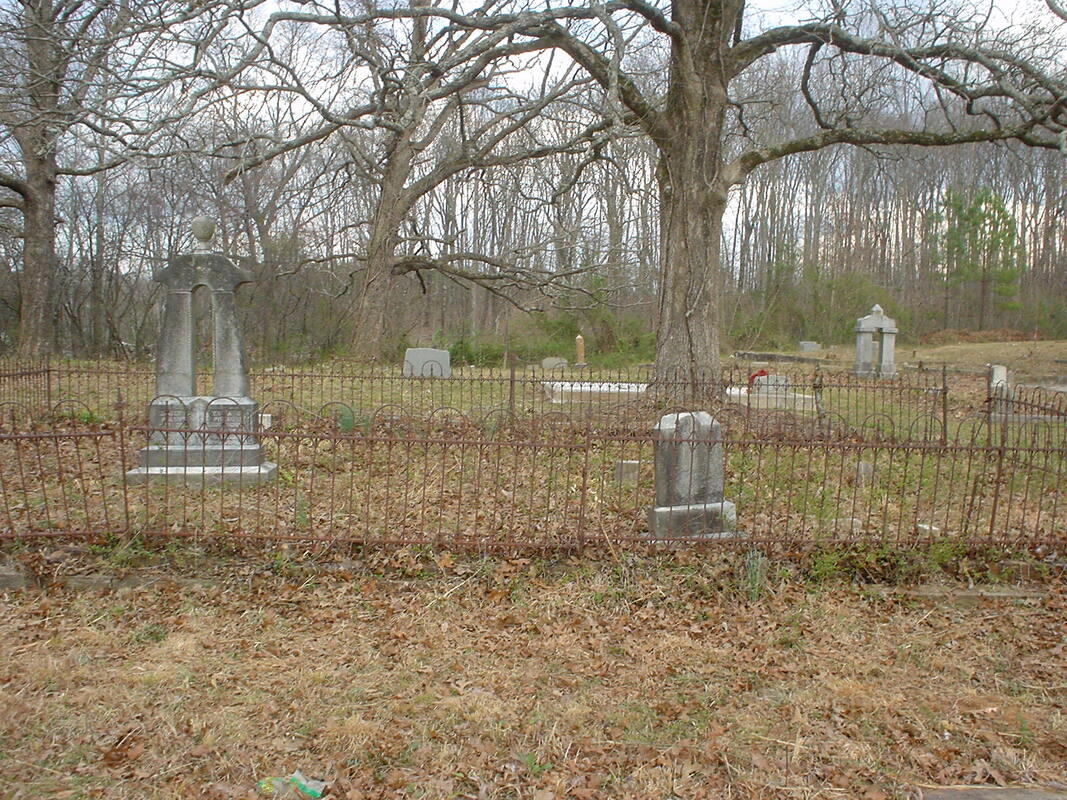 The Phillips lot before most of the wrought-iron was stolen. The leaning tree in the background fell soon after this photo was taken.
Block 8: The Collins and Barfield graves indicate this block beginning at the driveway. It extends back toward blocks S and T but encounters a terrace 2/3 the way back.

Block 9: The Butler and Matthews-Wells graves indicate this block beginning at the driveway. It extends back toward blocks S and T but encounters a terrace 2/3 the way back.

Block 10: There are few marked graves near the driveway in this block, but the Baker and Buchannan graves start farther back. It extends back toward blocks S and T but encounters a terrace 2/3 the way back.

Block 11: The Dodd and Wilkes graves indicate this block beginning at the driveway. It extends back toward blocks S and T but encounters a terrace 2/3 the way back.

Block 12: This block is tricky to point out as there are few marked graves in it. Most distinctive is the Davis family grave which as of 2016 lies next to a pair of oak tree trunks that fell some years ago. This is getting into the less understood portion of Section 1, discussed further in Block 13 below.

Block 13: For most graves in this large section, we have no way to identify their locations. There are few named markers—so few that we can not determine a clear numbering system. There are two rows of small round markers—like cans filled with concrete with 1- and 2-digit numbers carved on them, which we believe were for a series of infant graves in the area. Records show at least 245 people were interred here from 1934–1944.
Blocks S and T: These two long rows of burials were apparently added along the back property line in the 1960's. There are few marked graves, but since they are linear with depressions in the ground, it is sometimes possible to determine a location with some level of accuracy. Block T is along the fence with Block S one row farther from the fence. at some point the flat ground used for these burials is a steep hill, and we believe there is a planned gap in numbering at this point. The lowest space numbers are farther south, starting behind blocks 6 and 7. The last ones are in the back of block 13. As of this writing in September 2016, the middle sections of these blocks have become overgrown because it can not be maintained by mowing and we have not had cleanup events in some time. Hopefully this full area will be clear again soon.